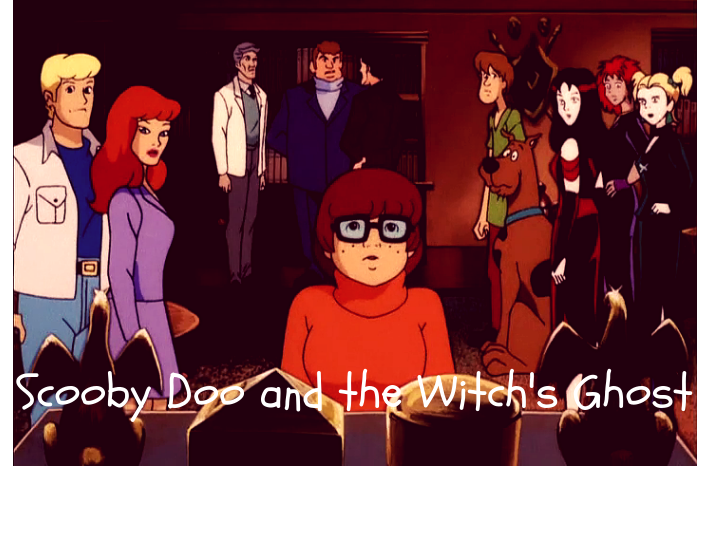 A Warner Home Video feature-length animated movie, Scooby Doo and the Witch’s Ghost, that was produced by Hanna-Barbera Productions premiered on DVD in 1999. 8/10

During a scheme to catch museum thieves, Scooby and the Gang are upstaged by the famous horror novelist, Ben Ravencroft. Velma is a huge fan of his and he invites the gang to the town where he was born. Once there, the gang and Ravencroft discover that the once quiet New England town is now a busy tourist attraction due to a legend of witches and has a concert scheduled with the punk/Goth band, “The Hex Girls.” Ravencroft tells the gang about his old and long-deceased descendant, Sarah Ravencroft, who was shunned by the townspeople for being a Wiccan witch. Ben is determined to locate Sarah’s grave to find the book that she was buried alongside. In the meantime, a ghost witch has been terrorizing everyone. Join the Scooby gang and the horror author as they try to find out the truth behind the witch and find his book. As usual, nothing is as it first appears.

“Scooby-Doo and the Witch’s Ghost” is another newer Scooby feature-length animated movie distributed by Warner Home Video. This movie is produced by Hanna-Barbera Productions and released in 1999.

The story is perfect for a Scooby movie. “Scooby-Doo and the Witch’s Ghost” is reminiscent of the original series in story, acting, art, and atmosphere. What better for the Scooby gang and for viewing around the Halloween holiday, than a story involving a horror author, a Goth vampire band, and a ghost witch? This movie will take you back to the Scooby episodes of yesteryear, while incorporating updated technology. The story is also easy to follow for children.

The voice actors are great again. This time, Frank Welker only does his role as Fred and not as Scooby. Casey Kasem, who made the voice of Shaggy his own, does not return to voice the quivering, shaky voice of Shaggy. Scott Innes pulls double duty as the voice of Scooby and Shaggy. Innes does so well that it is difficult not to think that it is actually Welker and Kasem.

Tim Curry guest stars as the voice of the horror author, Ben Ravencroft. Curry gives the author an air of high society, but one must be wondering where a New England-born native acquired his slight British accent. One interesting aspect of this character is that he is a horror author from New England, just like Stephen King. The character’s facial appearance bares a striking resemblance to King; he even wears glasses.

The setting of an old New England town offers the perfect backdrop for a spooky story about witches. Perfect for hot chocolate or popcorn on a cool autumn night.

The artwork is just a tad crisper than the 1960s series, but still offers a nostalgic appearance with a slightly faded image.

Love the music. It fits every scene perfectly and with great rhyming lyrics, but not rap. Billy Ray Cyrus stays true to the original Scooby theme with his own rendition. The Hex Girls’ music is not very heavy at all, which parents might be glad to hear.

The DVD menu art is very fun and colorful. There are also several entertaining Special Features that children will enjoy including, Mystery, Inc. Bios, The Scooby-Doo Dare, Making of Special, Music Video, Trailer, and Sneak Peeks of Scooby Videos.

If you are a Scooby fan or need something to keep young kids entertained for 70 minutes, this is the perfect answer. As always, be careful with younger viewers because some aspects of the movie may frighten them. I recommend screening it before allowing them to view it. Below is the Scooby Doo and the Witch’s Ghost trailer: