As any Star Trek fan will tell you, one of the all-time unforgettable scenes from the series is in “Trouble With Tribbles.” In that sequence, the gallant Captain James T. Kirk (William Shatner) opens an overhead cargo bay door only to be buried alive in the little omnivorous fur balls.

Ten years later, Shatner got to recreate that scene, sort of. Only this time the man who later became TJ Hooker and Denny Crane found himself head deep in tarantulas. It’s interesting to note that in Trek Shatner just looked like he was having a bad day. With Kingdom of the Spiders (1977), one gets the impression Shatner isn’t faking it. He’s terrified! 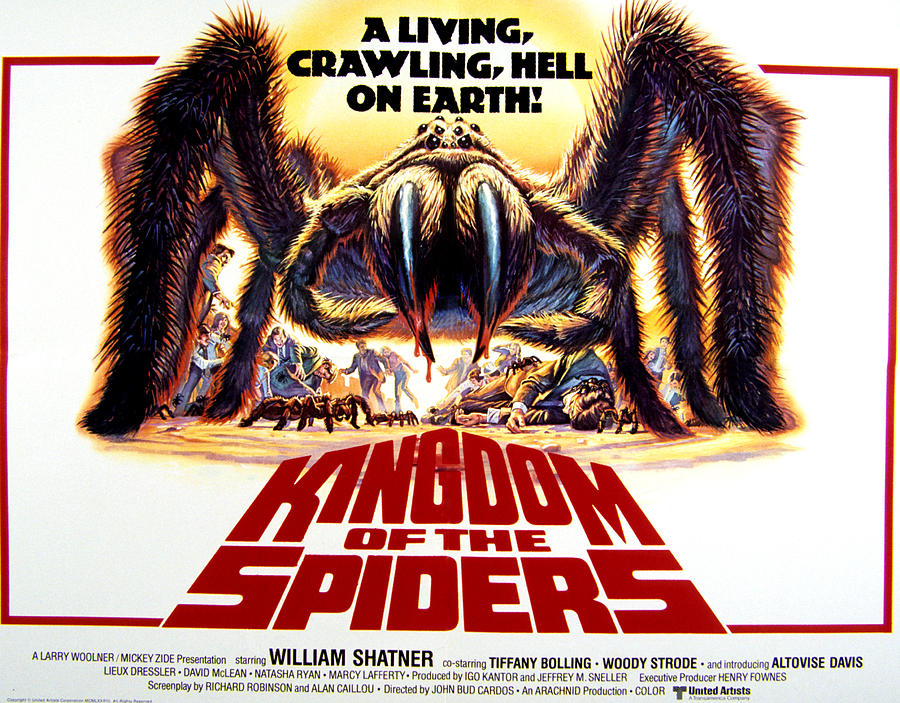 A Creepy Film for Cast, Crew, and Audience

As it turns out, in an interview Shatner grants in the Shout! Factory reissue of this classic horror B-movie, Shatner admits as much. He even admits his natural scream is a falsetto.

As historians know, the 70s weren’t the best of times for Shatner. In 1977, the relaunch of the Trek franchise was still a couple of years away. Shatner survived by doing a number of B-movies and TV guest appearances. Some of them, such as 1974’s Big Bad Mama with Angie Dickenson, are now considered grindhouse classics. Most should remain forgotten. Kingdom of the Spiders belongs in the former category.

The plot is pretty simple. Much like Alfred Hitchcock’s The Birds, a small western town is suddenly attacked by what seems like millions of the hairy, creepy crawlies. Unlike the film by the master, there was nowhere near the special effects budget. Shatner is about the only name actor in the cast, unless you count Willie Stroud and Tiffany Bolling.

Most of the movie’s budget went to what Shatner describes as shopping bags full of the big bugs, cans of what we would later call silly string and the prerequisite gummy makeup to make the swollen lumps needed from the bug bites. Even the pyrotechnics, what there were, are an extremely low budget.

Getting Caught In This Spider’s Web

How director John Cardos got around this was by becoming with a semi-credible reason for the ultra-aggressive bugs, an amazingly memorable, haunting soundtrack and properly creepy camerawork. Shatner himself does some pretty credible work as a rancher trying to save the day as does Stroud and Bolling.

If the film isn’t enough of a reason for a Saturday night with a fresh bag of popcorn and ultra-sugar laden carbonated beverage, the extra content cinches the deal. Shatner provides a very generous amount of time on his EC interview segment. Also, pretty funny is an interview with the guy who handled all the tarantulas. If that isn’t enough, there’s also an alternative audio track with commentary from Cardos, movie trailers and a few unfinished, deleted and other included scenes. The film itself is also in fairly pristine condition.

Fans of classic horror films should be glad this film is back in circulation. That it comes in with such fun extras and in clean condition should have everyone screaming (in falsetto) with delight.